This page contains information on the mods available for Fallout 4 on PC and (eventually) Xbox One / PS4.

For information on installing mods on PC, see guide to using the Nexus Mod Manager or installing mods manually. For those of you on console, here's how to install mods on Xbox One.

WARNING
Installing mods requires you to add to / remove / alter the main files
of the game - ALWAYS use caution when installing mods.

This mod by Cirosan and Shadwar removes the four vague response prompts and replaces them with the full text of what your character will say, similar to the dialogue options in Fallout 3 and New Vegas. There's also a French and Russian translation available.

There's a 'Lite' version for gamepad users, though it currently lacks the proper formatting to keep longer responses from being cropped off the screen.

Instead of frantically searching for ammo while simultaneously collecting dozens of useless spare parts, why not put that junk to good use and craft yourself some bullets? Thanks to Xylozi's mod, this functionality is now enabled - and it sort of begs the question 'Why wasn't this included to begin with?'

This simple mod by Abbalovesyou allows you to equip armor pieces (arms, legs, chest, etc) on top of most of the basic clothing items, such as suits, flannels, jeans and more. While the in-game models may not always line up correctly, this is an excellent mod for a slightly more realistic outfitting experience.

Do you find it odd that, by default, your character walks around casually aiming their weapon at anyone and anything? This mod by lesma666 swaps the default first-person carry animation with a more relaxed and natural weapon position.

The Iron Rose apparently hates picking locks, and if you do, too, you should definitely install this mod that lets you crack every lock on the first try. While you still have to unlock the Advanced, Expert and Master lockpicking perks, this definitely means opening doors and scoring loot much easier.

This mod by zilav will force any terminal you're capable of hacking (Novice, Advanced, Expert or Master) to only display the correct password option, instead of making you slave away at a tiresome minigame. This definitely helps make opening doors and finding loot much easier.

This mod by SombreErmine automatically confirms your Favorites Menu selection for you instead of you needing to press 'A' on your controller or 'Enter' on your keyboard. This is especially helpful for people who play with a controller if they're in the heat of battle and don't want to take their finger off the right control stick.

Tired of taking a long time to build houses for your various settlements? Need more buildings for Sanctuary fast? Try using this mod made by Jyasu that allows you to plop houses into your settlement.

It should be noted that it can be a bit tedious to get the houses in the right position to be placed on the ground. It helps to rotate the structures and move around before you get the spot where a house can be placed. Some settlements may be a bit more difficult to work with than others, but with a little patience you can give any settlement a ton of new homes.

The mod comes with an additional 13 new structures that are premade and can be placed in almost any settlement in the game.

This mod by HittingGuide45 replaces most of the combat music found in Fallout 4 with music from the Hotline Miami games.

This mod not only replaces the combat music but also audio like the main menu music and death sounds which add a different feeling to the game. What is the difference between a digital and mechanical metronome.

Are you a fan of the Macho Man Randy Savage? Well this mod from Rishlite allows you to hear the glorious 'OH YEAH' every time you place a lot of resources within one of your selttlements.

The mod also changes the Pip Boy icon picture that pops up each time you earn extra experience to a picture of Macho Man Randy Savage. Everything is better with a little Randy Savage giving you props for doing well.

This mod from creators AronaxAE and FancyPants is based on the Macho Dragons mod from TESV: Skyrim. It takes the default skin / audio package for the Deathclaws in Fallout 4 and replaces them with everybody's favorite pro wrestler Macho Man Randy Savage.

These mods not only change up a lot elements to the gameplay of Fallout 4, but they also have a slew of neat effects that offer a lot of fun.

There are a few Star Wars related mods that have come up in the community. This mod from Moraelin allows your character to wield a Lightsaber and bring the power of the force to the Wasteland.

The mod itself comes with four different colored lightsabers, along with unique animations and light sources for when your character wields them. You can find Blue, Red, Green, or Pink lightsabers when you install the mod. 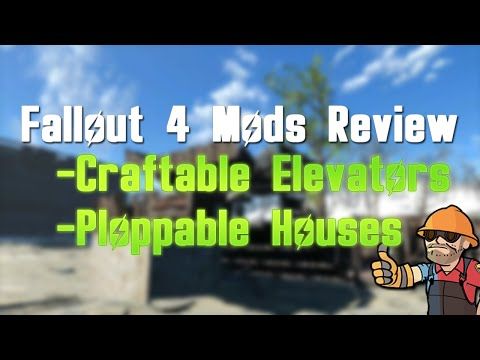 If using a lightsaber in Fallout 4 just isn't enough for you and your Star Wars fandom, here's something else for you. This mod from Shigen gives you the chance to wear Darth Vader's mask in the Commonwealth. Show them the power of the Dark Side of the Force and become a true Lord of the Sith. The mod itself is a Power Armor helmet that has its properties changed to look like Darth Vader.

Ever wanted to launch a baby from a nuke launcher? As sick as that may sound, you can do so with this mod from Trainwiz. This mod changes all Mini-Nukes that are launched from a Fat Man into the model of your child Shawn.

Every time you fire the Fat Man, a small baby will be launched out. It may be somewhat messed up, but it definitely still packs quite a destructive punch.